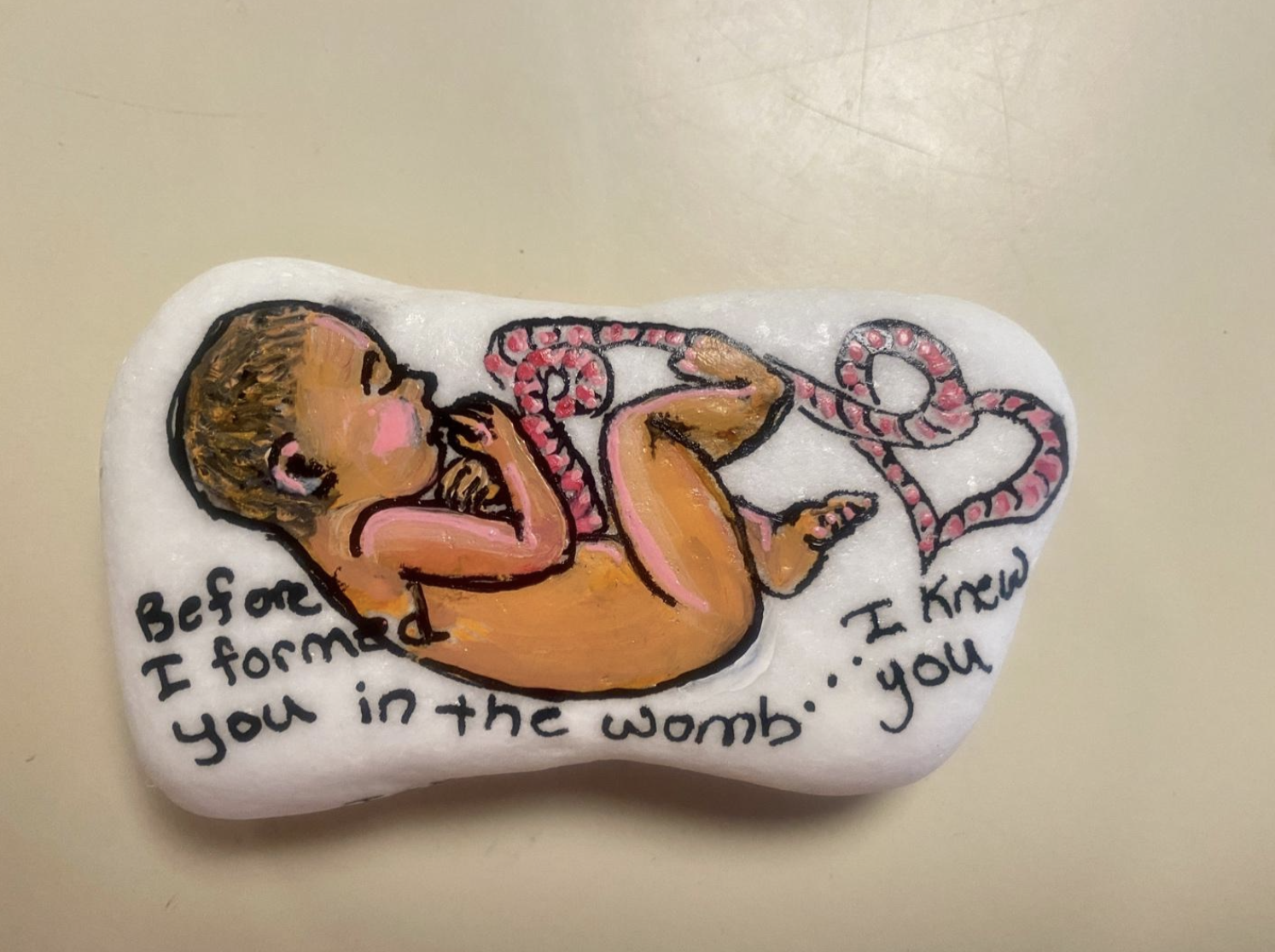 The abortion centers in Charlotte were closed on Memorial Day, praise God. But we still learned of a baby saved. A woman contacted me who had chosen life months ago but never told us when she left the abortion center. While I do not remember her, she remembered me. I had given her a rock with a baby in the womb painted on it and the verse Jeremiah 1:5. Before i formed you in the womb, i knew you…

I must have known she was lying when she told me she was there to support a friend, not to have an abortion herself. I would not have given her the rock otherwise. I only give out the baby rocks I paint when a mom has chosen life or I hope to influence her in a choice for life when I know she is conflicted.

She told me she had lost our literature with my phone number on it, but she kept the rock. The verse strengthened her in her resolve not to kill her baby. She was all alone with no family support and the baby’s father would only be in her life if she killed their unborn child. He kicked her out of his home and his life. She was homeless with her three children, living with various friends, until two weeks ago when she finally got the apartment she could afford that she had been longing for.  She had been on a waiting list for two years! That whole time, she refused to kill the unborn child, despite all the struggles. She looked at the rock and knew that God was the one forming the child in her womb.

While cleaning to move in to the new home, she found the pamphlet with my phone number which I had given her so long ago. She called me because she is due in six weeks and has NOTHING for the baby. NO ONE was supporting or helping her. She had a decent  job, but struggled to meet the needs of her children and show up faithfully to work. She hated to ask for help getting baby supplies but didn’t know what to do. I told her Love Life and its partnering churches would help her. I shared the Gospel and she recognized she had not been living a life with Jesus as her Lord. She wanted right then and there to fully submit her life to Him.

Within minutes of getting off the phone with her, we connected her with Sheryl Chandler of Truth and Mercy Prolife ministries who will whip up a shower this month providing TWO YEARS of baby clothing and supplies. Supporters are already donating dishes and living room furniture. She will be appointed a mentor who will disciple and help her with the backing of a church.

As I was concluding our phone call, she asked me if I would paint her another rock. I told her I would love to and encouraged her to send me her favorite verse. Later she asked if I could put the verse Romans 8:31 on her new rock.

“What then shall we say to these things? If God is for us, who can be against us?”