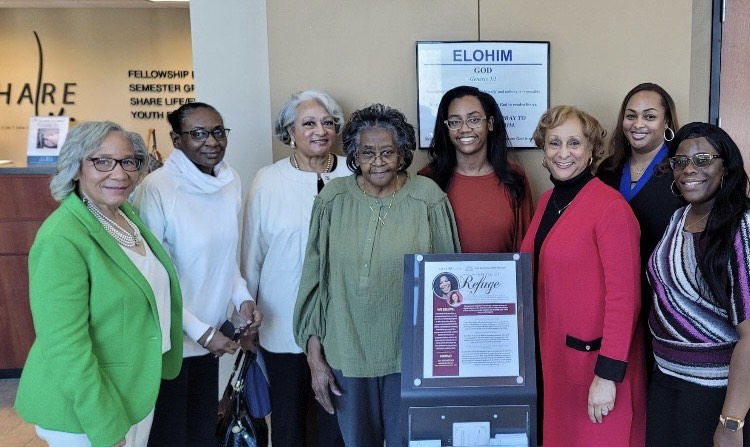 Then Jesus said, “Which one of these three men do you think was a neighbor to the man who was attacked by the robbers?” The expert on the law answered, “The one who showed him mercy.” Jesus said to him, “Then go and do what he did.” Luke 10:36-37

When Minister Leria of The Guiding Light Church came out to Planned Parenthood’s sidewalk, she wasn’t looking for another ministry to undertake. She was simply responding to Love Life missionaries who had invited her and her staff to a “Pastor’s Preview” to see what was happening in her city…under their watch. It was painful to see cars drive into the clinic, but Leria says she’ll never forget what she saw as one car drove out of the parking lot near where she was standing. “There was a young girl on the passenger’s side; her seat leaned all the way back. From the look on her face, I knew that she had just had an abortion,” Leria recalled. “It tore me up physically and emotionally. At that moment, I realized I had to do something,” she resolved. “I wrestled and prayed about it for days to come, and the Lord confirmed what was stirring in my heart.”

Later, when Love Life missionaries shared with her team about how House of Refuge Churches are safe places of help and hope for both the abortion-vulnerable and the post-abortive, she needed no convincing: God’s hand was all over it, and she was all in. In just a few weeks, Leria made an announcement to the rest of the staff and then the whole church, with Bishop Lowe’s full approval. “Within just a day of announcing our stance on life as a House of Refuge Church from the pulpit, we began to get a response,” Minister Leria affirms. “A single girl in her twenties from our congregation made a bee-line for me after the service and told me she was pregnant and didn’t know what to do. I, myself, hadn’t even had time to formulate a full plan, so what I said was, “Whatever you do, don’t go to Planned Parenthood. You’re safe here with us. We love you and your baby, and we’re going to help you and take care of you.” And so began the Life Journey for The Guiding Light Church.

Love Life Missionaries connected Leria with Positive Choices, the nearest Christian Pregnancy Center, and the Life On Wheels Medical Mobile Unit, where she gained both resources and allies. Thrilled to have an African-American church boldly taking a stand for life and backing it by genuine support, both the pregnancy center and the mobile unit began referring their clients to Leria and her Life Team. Just this month, they held their first baby shower for an expectant mom. “Everything happened so fast, but it has been an incredible experience,” Leria chuckled. “We just learned as we went.”

But the learning curve has been steep, and the life situations they are encountering are all different and often difficult. “We had one mom who is due in a month and already has a one-year-old,” Leria recounted. “The other day, her toddler pulled a gun out from underneath their sofa and was playing with it. The mother’s cousin came to the house and told her, ‘You need to teach him how to use that thing now before it’s too late. He’s gonna learn sooner or later anyway.’ It was just shocking to me to see what kind of world so many of these young people are dealing with,” Leria sighed and continued. “We also had a mom that, despite all of our counsel and help, still chose to abort her baby when the baby’s father told her he didn’t love her or the baby. We were devastated by her choice and really wondered if we had just totally failed. But we remembered that we can only offer the love and help of Jesus–we can’t force people to receive it,” Leria conceded. “There are so many layers of discipleship and help that they need to learn God’s ways and leave their broken ways of trying to survive without God. Dealing with real people’s lives is messy work–but that’s right where God calls his people to be. If we don’t get down in the ditch to help our neighbors out like the Good Samaritan did, we become like the priest and Levite in the story who had head knowledge of truth but no real love in their hearts.”

Though the Life Team has already helped several moms through pregnancy and delivery, with five more moms due in the next several months, Leria says they feel like they are at a place where they can catch their breath, re-evaluate their long-term discipleship strategy, and get some training so that their whole team can get on the same page and become a support to one another. “I think it’s time we all go through Making Life Disciples 2.0,” Leria agreed after learning about the resource produced by Care Net. The online training platform helps small groups and Life Teams grow in their understanding of how to best talk to and help those who are abortion-vulnerable. Love Life also offers training in Sidewalk Outreach, Mentoring, Orphan and Foster Care, and Restored Life (post-abortion healing).

“All of the training is super-helpful. But I just want to say to the other churches out there to be bold and courageous! Take a stand! This is what God has called us to do, and He will show us how to love on these women and men in Jesus’ name,” Leria challenges. “We don’t have to be perfect, but we will have to get outside of our four walls and the comfort of our homes to answer His call to ‘GO and make disciples.’ But when we follow His Word and obey, He starts parting seas and working miracles that are better than what we could have ever imagined,” she affirmed and added, “Just open up your heart to it!”

When I am Weak, He is Strong – by Vicky Kaseorg